skip to main | skip to sidebar

Could these rules, which include the requirement that prepaid mobile phone credits must be reactivated when phones are recharged and must be valid for 180 days rather than current requirement of 90 days, be good for mobile operators as well? Definitely.

During a global study of potential first-time mobile handset purchasers, our field researcher team in Egypt reported that Mobinil's new Lifetime Validity program (allows customers to make only one charged call every three months to retain their prepaid-account) was mentioned as an incentive for low-income individuals to finally buy a mobile phone. Mobinil's CEO notes “...this has had a very significant market impact for us. We saw large subscriber growth following the introduction of this offer...” Vodafone soon launched a lifetime validity program of its own and in its July 2007 Interim Management Statement, it noted that "Organic customer net additions were 1.0 million, with a positive reaction to the introduction of lifetime validity for prepaid customers."

Whether they are forced, as in the case of Brazil, or pushed for, as is the case of Mobinil in Egypt, business model innovations will put mobile phones and service at the reach of individuals lower and lower down in the economic pyramid - likely to the benefit of both consumers and corporations.
Posted by Vital Wave Consulting at 5:29 PM No comments:

Are Mobile Phones Going the Way of Refrigerators?

A recent study by Enterprise Africa! on emerging-market technology trends examines the poverty-alleviating aspects of mobile phones in Africa. The organization looked closely at the small, Southern African nation of Botswana, where cell phone subscribers jumped from zero in 1998 to 823,070 by March 2006. With mobile technology now reaching roughly half the population, Botswana is a model for other developing economies striving to impact development through access to technology. Most notable about the study is the utilitarian rationale provided for cell phone ownership - safety and business expansion.

As handsets penetrate ever-lower rungs of the economic ladder, new buyers are more concerned that the purchase can be justified as an essential utility. Mobile phone companies in developing countries are competing for a share of the wallet with non-traditional competitors such as household appliance retailers. Vital Wave Consulting research found that many low-income residents of developing countries consider a stove, TV and refrigerator to be “essentials” and all other electronic and durable goods, including mobile phones, “luxuries.” In one study of prospective phone buyers in six emerging-market countries, TVs were preferred over both landline and mobile phones by two-thirds of respondents.

In order to capture growth opportunities in these rapidly-expanding markets, mobile phone service providers and manufacturers would do well to convey the safety and business benefits of cell phones to potential customers who live on little more than $1 per day. Low-income consumers are required by virtue of their limited resources to conduct a careful cost-benefit analysis for all purchases. With refined value-proposition messaging that includes the utilitarian functionality of cell phones, the mobile industry may accelerate the growth of their market opportunity among lower-income segments in developing countries.

Posted by Vital Wave Consulting at 12:12 PM No comments: 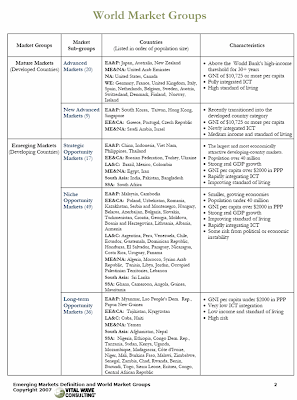 Over 141 countries, representing 84% of the world’s population, meet these criteria. The proportion of worldwide technology expenditures by emerging-market countries is steadily increasing relative to mature markets. The ten largest emerging markets are expected to spend $558 billion on IT and telecommunications in 2009. By 2015, the combined GDP of emerging-market nations will surpass that of the top 20 developed economies.

Marketing to the Masses: Bringing Low-cost PCs to the General Public

Dominating the technology and emerging markets news again this week is the race to capture the low-cost PC market in developing countries. Via joined its competitors last week with the release of a low-cost education PC in South Africa. Intel also announced that they are joining forces with the One-Laptop-per-Child initiative, adding the tech giant’s heft to the project, and two weeks ago we discussed Microsoft’s recent launch of the IQ PC for India. The solutions all share a focus on the education market and have limited distribution.

PC and software companies aim for the education segment in emerging markets because government buyers, even in poor countries, can have relatively large budgets. Vital Wave Consulting research shows the 10 largest emerging-market countries spent an estimated $4.7 billion (USD) on IT in education last year. A well-designed computer with relevant content can help meet a country’s education goals, and affirm the PC manufacturer’s commitment to social and economic development, blunting any criticism that they are capitalizing on the world’s poor.

Targeting the education segment is strategically sound, but the fast-growing consumer segment also presents a significant opportunity for multinational companies (MNCs) looking to increase revenues in developing countries. Original research by Vital Wave Consulting identifies a noticeable discrepancy between consumers’ perception of PC prices and the actual price offered in the retail channel. In-depth interviews of likely near-term PC buyers in seven emerging markets showed that the prices most consumers are willing to pay for a PC actually exceed the current price of a basic computer. MNCs can increase their total addressable market (TAM) by educating potential buyers about the “true price” of a starter PC. This is one strategy that can help MNCs capture near-term incremental market opportunities with minimal disruption to existing business processes.

* Michael Dell and OLPC execs spar over recycled PCs
* Developing countries as leaders in innovation
* iPhone as a computer of the future with developing world applications
Posted by Vital Wave Consulting at 9:38 AM No comments:

For all of the talk about WiMAX being the silver bullet for rural connectivity and bridging the digital divide, I have seen many announcements about WiMAX deployments in major urban areas.

This week MTN Uganda will start a national deployment of WiMAX across Uganda. According to a press release by Alvarion, MTN Uganda's WiMAX technology partner, WiMAX will first be deployed "in the capital and largest urban settlement of Uganda – Kampala, [and] is planned to be followed by additional network deployments in 30 other cities across the country."

A few months ago Saudi Arabia went live with a WiMAX deployment on Tahlia Street in downtown Riyadh as a part of its "SmartCity" program. Mohammed Saquer, CEO ITC states that, "this service will further our effort to enliven downtown and continue Riyadh's aim of being a city at the cutting edge of technology innovations." Intel is an active partner in this initiative to revitalize cities.

Even in the United States, WiMAX will be deployed in urban areas. SprintNextel selected ZTE to supply their WiMAX solution, which they plan to use to "cover 85 percent of the households in the top 100 U.S. markets."

Perhaps Ericsson's statement about the lack of a solid business case for WiMAX was referring to WiMAX in rural areas?
Posted by Vital Wave Consulting at 8:39 PM No comments:

GE Chairman and CEO Jeffrey Immelt offered up this week’s nugget at a gathering of Indian Institutes of Technology (IIT) graduates in California’s Santa Clara Convention Center. During a wide-ranging address, Immelt characterized three generations of technology business: the past, in which developed-world companies designed for mature markets; the present, with developed-world companies tapping emerging-market manufacturing and personnel resources to deliver products and services to mature markets; and the future, when developing-world companies design and sell products and services to mature markets.

Vital Wave Consulting wondered why Immelt’s three generations each ended with mature-market (rather than global) buyers, when GE’s revenues from emerging markets are projected to grow from $10 billion to $50 billion between 2000 and 2010. Last year, nearly 20% of the company’s $163 billion in revenues came from emerging markets, and revenue in these markets rose 14% in the first quarter of 2007. Emerging markets already represent the fastest growing markets for global technology companies, and overall revenue potential in these regions will soon overtake that of mature technology markets. For GE and other technology companies, a more accurate description of the third generation of technology business is global companies designing for global markets, not just the developed world.

Immelt’s audience of primarily Indian-born engineers, eager to compete in the world’s most advanced markets, was receptive to his suggestions. Successfully designing for the developing world, however, presents a worthy challenge and, in the long-run, larger rewards. Business trends suggest that companies based in developing countries will not only be selling into mature markets, they will also be designing for emerging markets around the world. With lower cost structures, technical expertise, and a broader understanding of global problems, emerging-market entrepreneurs may bring a richer set of solutions to local challenges. Multinational corporations, however, retain the advantage of global scale. To lead in developing countries, they must develop effective strategies to design for the world’s growing mass markets. First, however, they must acknowledge that the market opportunity is global and that, if they don’t act fast, their counterparts in developing countries will.

Posted by Vital Wave Consulting at 1:32 PM No comments:

Raising the Bar on the PC Price Debate

Microsoft and AMD teamed up last week to launch the IQ PC, a desktop computer targeting the education market in India. Using local partners such as Zenith Computers to produce and distribute the hardware, the PC is being piloted in select Indian cities with plans for a national rollout later this year. The computer comes equipped with a basic version of the Windows Vista operating system, an assortment of educational software such as Encarta and Student 2007, and an online content repository. The PC appears to be a well-designed education solution, but with a $513 price tag, Microsoft’s latest effort to join the low-cost PC race is being criticized by bloggers and the press for being too costly for developing countries.

Increasingly, media and online coverage of PC initiatives for education in developing countries have focused disproportionately on the price tag of the computing device. Dell’s EC280 sells for $336; Intel’s Classmate PC is coming in at $249; and the One Laptop per Child program’s XO computer (formerly called the $100 laptop) costs $175. Attention on the price of the PC, however, may ultimately be misleading buyers. The total cost of PC ownership (TCO) also includes standard costs such as support, training and installation as well as often-overlooked expenses such as electricity consumption and insurance which can be significant in an emerging-market setting.

For price-conscious customers in emerging markets, understanding the real price tag of technology purchases requires an assessment of costs over the life span of the product. With more comprehensive TCO analyses, buyers are better equipped to make informed decisions. Corporations seeking to combat apples-to-oranges comparisons between education computing solutions will deepen the discussion to one of total cost of ownership. It is only then that the public discourse will address the true cost of computing devices for the classrooms of developing countries.

Posted by Vital Wave Consulting at 11:08 AM No comments: