skip to main | skip to sidebar

Collaboration Shaping Demand for Health Technologies in the Developing World

A consortium of international health stakeholders just issued a call for collaboration to expand the use of technology in reducing maternal and newborn mortality. The call was issued by the Partnership for Maternal, Newborn and Child Health (PMNCH), an international alliance of 280 governments and development community members working to reduce maternal and infant mortality. This group has garnered the support of high-profile organizations such as the mHealth Alliance, a cross-sector organization launched in 2009 by the Rockefeller, UN and Vodafone Foundations. When organizations such as these collaborate, they are actually shaping how governments will use and demand technology in the future.
Maternal and child health has captured broad attention throughout the development community. Reducing maternal and child mortality is the stated goal of Millennium Development Goals (MDGs) 4 and 5, and they are the goals that have seen the least amount of progress. The recognition that insufficient progress has been made in these areas is illustrated by the emergence not only of the consortium, but of other organizations such as Advanced Development for Africa (ADA), a new foundation dedicated to scaling African health programs with a focus on maternal and child health as well as communicable diseases. And The Bill & Melinda Gates Foundation recently announced $1.5 billion in funding over the next five years for maternal and child health, family planning and nutrition.
Multinational companies seeking to expand the reach of their technology solutions in the developing world can advance their goals by getting involved with the development community early. By identifying and mobilizing resources towards key issues, the development community is influencing the health agenda and ultimately the technologies that governments procure. For instance, a new partnership between the Carlos Slim Institute for Health, the Gates Foundation, the Government of Spain and the Inter-American Development Bank promises $150 million to Mexican and Central American governments to support maternal health, nutrition, vaccination, anti-dengue and anti-malaria campaigns. Joining forces with leading organizations and emerging alliances in public-private partnerships can help multinationals get a seat at the table and shape the new demand for healthcare technologies.
Posted by Vital Wave Consulting at 11:33 AM 2 comments:

Africa's homegrown companies come into their own

The start of the World Cup in South Africa this month promises to shine a new light on Africa's increasing economic dynamism, which is often overshadowed by the flashier growth of markets like China and India. It is not just the continent's consumer base that is expanding; homegrown African companies are also spreading their wings and challenging foreign multinationals in areas such as retailing, financial services and mobile communications. These firms are taking advantage of reduced barriers to intra-African trade and their knowledge of African consumer tastes to grow beyond their home countries and gain the scale they need to compete with companies from outside the region. The rapid growth of forty of the best

African firms have even led The Boston Consulting Group to christen them the "African Challengers". The growth of local "champions" signals a new maturity in African markets. In these countries, as well as other emerging markets, the emergence of competitive local companies usually follows a period in which foreign investors have taken advantage of political stability, low-cost labor and favorable incentives to produce goods and services for both local and export markets. Skills and knowledge transferred by these firms to local workers, as well as increased economic activity, then fuel the growth of native firms. An increasing number of African countries, in particular South Africa, Botswana and Kenya, now have the conditions in place to produce enterprises that can compete with multinational corporations (MNCs).

The growth of these companies poses a challenge to Western firms, but it also presents an opportunity to learn from the strategies and innovations of businesses that have their finger on the pulse of local customer segments. When entering new geographies, MNCs would do well to "go native" by understanding local, competitive dynamics. Thorough competitive intelligence and analysis of emerging-market competitors can be a critical part of MNC success on a global scale, especially when these new, local entrants threaten to upset the status quo.
Posted by Vital Wave Consulting at 6:00 AM No comments:

Esther Dyson on health and the quantified self... 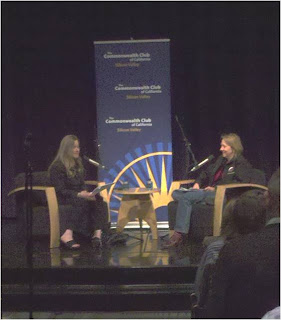 Esther Dyson spoke at the Commonwealth Club at the Microsoft campus in Mountain View last night on Homebrew Healthcare or the "quantified self."  Esther has been active in the health space with investments in Keas, Polka.com and patientslikeme and board seats with Voxiva and 23andme (which has been in the news quite a bit lately and was a hot topic in the Q&A session).

Esther believes that there are three health-related markets:
Many of the firms with which Esther is involved are in this third category, the wellness market. Interestingly, the idea of parallel health and wellness markets also surged at the Mobile Health 2010 conference - seems to be a common theme when discussing new technologies and health.

A recurring topic throughout the discussion was data privacy. Esther commented several times that people do not want privacy or to share, what they want is control. They want to determine who gets to see what data. She polled the audience - almost everyone said that they would be comfortable providing fitness-related data to a close group of friends so that they could help motivate you with your fitness goals. Conversely, almost NO one said they would feel comfortable providing fitness or health-related data to their employers. Lastly, Esther noted that patients with terminal diseases (several of those on patientslikeme) may be willing to share everything with pharmaceutical companies if it would help accelerate the discovery of a cure (likely for other patients and not themselves).

Much of the world is focused on South Africa and the 2010 World Cup and technology is playing a significant role in enabling fans to get their soccer fix. For example:
Soccer fans crave information and love to debate the  virtue (or shortfalls) of the games, players and teams....developers of mHealth, mEducation and mGovernment services could likely learn from the diverse ways the soccer community has engaged with technology and how to best reach diverse populations and market segments.
Posted by Vital Wave Consulting at 10:14 AM No comments:

The GSMA just launched its 2010 Annual Report on its Mobile Money for the Unbanked initiative. This report is an excellent resource on the current state of mMoney initiatives across the globe, which a particular focus on initiatives rolled out in emerging markets.

It also fleshes out case studies on:
Thank you GSMA for another informative report on the state of mServices around the world.
Posted by Vital Wave Consulting at 1:13 PM No comments:

Nokia unveiled a bicycle-powered mobile-phone charger kit along with four low-end phones targeted to emerging markets. Two of the new devices have dual SIM cards (designed to allow for multiple users of one handset or the use of multiple carriers for better calling rates). One device boosts standby battery time of up to 6 weeks and is envisioned for areas where electricity is scarce. The phones range in price from 30 to 45 Euro, which is low for the functionality, but still not completely affordable for many citizens of poorer emerging markets.

The bicycle-powered charger kit is an excellent idea for emerging markets where bicycles are still a very viable mode of transportation and where in many parts (even big cities) electricity is unreliable or unavailable. The long battery life would be valued by emerging-market and developed-country consumers alike as even in countries where electricity is abundant, batteries never seem to last long enough. Firms may want to consider applying some of the innovations designed for emerging markets (long battery life) could be considered for higher-end devices as some needs (always on devices) are valued across the globe.
Posted by Vital Wave Consulting at 6:00 AM No comments:

Obesity and chronic diseases - A part of development?

Obesity is rapidly increasing in China - 30 - 50% per year - and in developing countries across the globe as incomes improve, people work in more sedentary jobs and eat more processed food. With obesity comes diabetes, heart disease, high blood pressure and a variety of other chronic diseases and illnesses. In addition to obesity, longer life spans - which are also associated with economic development - also increase the likelihood of suffering from a chronic disease. Are chronic diseases a part of development?

Professors James Kahn, M.D., M.PH. and Joshua Yang, Ph.D. seem to answer yes to this question. In a report they wrote - The Relationship among Economic Development, Health, and the Potential Roles of mHealth - for a conference on mHealth in Bellagio, they note that:
Since it is unlikely that most people will reject these behaviors (as evidenced by the US and the increasing obesity rates in China and other countries), technologists should continue to focus on how to use technology for behavior change as well as for the tracking, treating and assisting people who end up with these chronic diseases. The success of these efforts are essential for the cost-effective care of those already ill and to stem the tide of future sufferers of these diseases.
Posted by Vital Wave Consulting at 6:00 AM No comments:

The Haitian earthquake has provided an entirely new perspective on the power of mobile phones. First was the discovery that serious fundraising can be done via the mobile phone. As of February 2010, $35 million dollars were raised for Haiti - in $5 and $10 increments.

The next discovery was that mobile phones could be used as survey and data collection tools. NPR reported that volunteer statisticians collected economic data (such as jobs and houses lost in the earthquake) via calls to mobile phones. Volunteers from Statistics Without Borders were surprised at how "chatty" the Haitians were and were literally shocked when survey participants returned their call. They noted that using cell phones to conduct surveys could be useful across developing countries. Many organizations around the world are already using mobile phones to collect data, but generally by visiting individuals and inputting data and not by placing phone calls to their mobile phones.

No one familiar with developing countries will be surprised with these finding - the fact mobile phones and mServices are an extremely powerful tool in developing countries. What is news is that more and more industries within the developed world are beginning to realize and exploit this - for the benefit of the citizens of these nations.
Posted by Vital Wave Consulting at 6:00 AM No comments:

Apple has sold more than 2 million iPADs over the past sixty days. Who would have expected such uptake? Not many if historic, supply-oriented forecasting techniques were used.

Future technology sales are often based on recent sales levels (e.g., how many PCs were sold in the previous quarter), which are adjusted based on current industry and economic conditions. With new technology, such as the iPad, this approach falls short as there there is little (tablet PCs have not been a vibrant product category) or no sales history to use to inform the estimates. Therefore, industry players can be blindsided by new product categories or innovations.

One solution to this problem is to use demand-oriented forecasting. By understanding what features and functionalities consumers (as well as businesses and government clients) value and the trade offs they are willing to make between performance, features, functionality and price, firms will be better positioned to estimate the demand for innovative products and services.

Apple seems to be quite adept at launching category-changing  innovations...their forecasters must be looking at more than historical data to inform their business plans or else we may never have seen the iPad.
Posted by Vital Wave Consulting at 11:55 AM No comments: